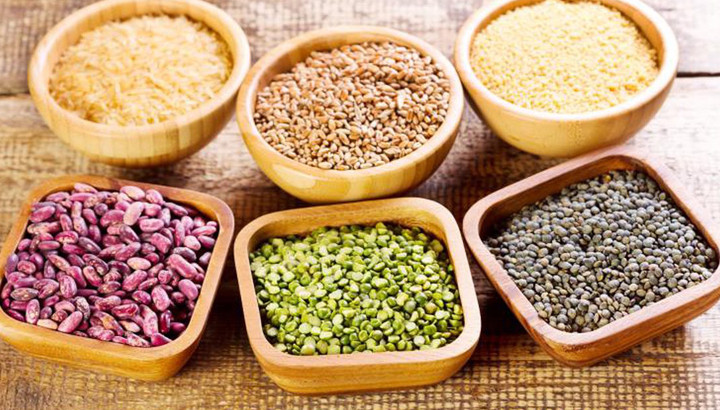 Have you ever heard that you must put on whole grains before cooking soaking for a night?

Do you know why this suggestion is given?

It comes from a substance present in the outer layer of whole grains which is called phytic acid or phytates (salt of phytic acid).

ROLE OF PHYTIC ACID (IN THE PLANT)

This beautiful molecule that you see on the side is thephytic acid. It's practically one necklace of phosphorus atoms. In fact, in plants, phytic acid makes it possible to accumulate phosphorus for future uses.

When a seed sprouts, the phytic acid is chemically 'broken' thus releasing phosphorus together with other minerals such as calcium and magnesium, which will be used for the development of the plant itself.

PHYTIC ACID: A MOLECULE WITH CHELES

However, this phytic acid has a particular aspect: it is a chelating agent.

This effect is sometimes sought after, because it can have a positive effect. In fact there are specific molecules (EDTA, DMSA or Zeolite) that are used to detoxify the organism as it they bind to numerous toxins.

After binding to the toxins, chelating agents are conveyed outwards, mainly through the digestive and renal systems. In this way they are useful for diverting toxins to the outside of the body (to which they are bound).

But each type of chelating agent has its predilection to bind to specific molecules. If EDTA, DMSA and Zeolite prefer toxic metals, phytic acid prefers other metals (minerals)...

THE PHYTIC ACID TENDS TO READ TO IRON, ZINC, MAGNESIUM AND CALCIUM

However, the chelating capacity of phytic acid is expressed against certain minerals that are important to us, such as the iron, zinc, magnesium and calcium, whose assimilation is reduced.

The phytates therefore tend to impoverish the minerals with which they are consumed. The phytates react only with the foods they come into contact with and they do not prolong their chelating effects in subsequent meals.

For example, if you eat a plate of brown rice and vegetables and the next meal will be based on fresh fruit, vegetables and fish, the chelating effect of the phytates will act only on the first meal and not on the second (from which you will assimilate all without interference the minerals it contains).

PHYTIC ACID: WHERE IT IS

In summary, phytic acid (or phytates) is contained with a wide variability in:

THEsoaking of whole grains serves precisely to reduce the content of phytates present in whole grains. Phytic acid, however, is also present in legumes, nuts (almonds, etc.) and seeds.

Since phytic acid is a compound water-soluble, the soaking of cereals causes it to lose a certain amount in the water. For this reason, after the soaking period, the water must be thrown away and the cereal must be briefly rinsed off.

In this way the phytate content of cereals, legumes and seeds is reduced.

Most detractors of phytic acid they hurl themselves at him by demonizing his ability to reduce the bioavailability of minerals.

This is followed by the advice to soak as much as possible all whole grains, including seeds and legumes. Leaving them in water (or water and lemon, or water and vinegar) for 6-12 hours.

2. Germination: eating or drinking the juice of sprouts (soy, chickpeas, lentils, watercress, etc.) has the double benefit of canceling the phytate content and at the same time integrating those same minerals that phytic acid tends to bind.

3. Fermentation: fermentation (ancient method of preserving food) reduces the content of phytates present in the food.

METHODS TO REDUCE THE CHELATING ACTIVITY OF PHYTIC ACID

In some clinical trials it has been shown that some natural substances are capable of reduce chelating activity of phytates by reversing their link with minerals.

1. Ascorbic acid and other organic acids (which for example is in lemon juice or vinegar)

With these 3 + 2 methods we have solved the "problem" of phytic acid! evvai 🙂

More recently, what was discovered about phytic acid?

This ability to bind the minerals that phytic acid possesses is only the tip of the iceberg of its properties.

Several studies have realized that phytic acid has some anticancer properties. In fact, it is hypothesized that phytates are one of the elements that give whole grains their anti-tumor protection capacity in the digestive system.

... and we want to eliminate phytic acid just because it absorbs some minerals from the meal? mmmh, it doesn't seem like the winning idea of ​​the century.

Other properties that emerged from the much mistreated phytic acid is capacity antioxidant and protection from kidney stones. Here is the updated list of all the beneficial properties of phytic acid.

Here is the overview of the benefits of phytic acid highlighted in various laboratory studies.

This very important benefit has been shown in various types of cancer including cancer colon, lung, liver, breast, prostate, skin and soft tissue.

Numerous very recent studies have continued to confirm this anticancer activity of phytic acid in animal and human models.

His ability to stop the formation of dangerous free radicals has been demonstrated. In addition to the general antioxidant properties of phytic acid, its ability to protect against lipid peroxidation has also been defined.

Lipid peroxidation is a particular process of oxidation by free radicals, which attack structures made of fat in cells, such as the cell membrane (essential for the normal functioning of the cell).

Another nice feature of the phytates is to prevent and reduce blood vessel calcifications (atherosclerosis). Inhibition of the calcification process in blood vessels contributes to a complete safeguarding effect on cardiovascular health.

How much need we have for this benefit at a time when deaths due to cardiovascular causes are in the first place in the world!

Inhibition of the formation of calcium salts crystals and prevention of kidney stone development.

Once again, as in the case of the blood vessels discussed above, the phytates counteract a type of calcification which occurs in the wrong place (in the kidneys rather than in the bones).

The role of chelating agent of phytic acid is not expressed only against certain minerals, but also on lead and cadmium. In this sense, phytic acid has a protective role. Think of fish and shellfish contamination!

Considering the fact that phytic acid in practice hardly ever causes problems of mineral deficiency (except in really special conditions) and regards the drawing of significant benefits above, I would say that certainly they win its benefits on the possible risks of reduced mineral assimilation.

Once again the synergy of the natural components of healthy food par excellence such as whole grains, legumes, seeds and nuts develop a decidedly beneficial effect compared to a minimal chelating effect on some minerals.

I don't think anyone ended up in the hospital because he ate too many whole grains or legumes, seeds and nuts. On the contrary, one can certainly say that many end up in hospital because they have based their diet on other raw materials by far less healthy compared to these indicated above.

CONSTANT QUIT: MAYBE IT IS BEST TO AVOID IT TO KEEP ALL THE HEALTHY ADVANTAGES OF PHYTIC ACID

Perhaps it is better to avoid the constant soaking of all whole grains and legumes. In this way we safeguard the activity of phytic acid which confers one anti-cancer protection which is definitely welcome!

The benefits outweigh the disadvantages.

On the one hand you have a certain reduction of 4 minerals (iron, zinc, magnesium and calcium) = disadvantage not fundamental and correctable.

On the other hand you have an additional anti-cancer and anti-oxidant protection = significant advantage that you do not want to lose or weaken.

Moreover those few disadvantages are very controllable thanks to these precautions:

- Use of shoots (centrifuged, extracted, or eaten fresh) away from main meals

- Adding a Multivitamin-multimineral a few times a week

A context in which it may make sense to think of soaking certain foods more frequently to reduce the phytate content is a condition of anemia (iron deficiency).

Another context can be a diet in which whole grains, legumes or seeds are always present at every meal (as can happen in a regime vegan or vegetarian).

However, this last condition is controllable and would suffice organize meals so as not to have food containing phytic acid at every meal.

In the case of vegans, which consume whole grains more frequently and in greater quantities, for example, can be implementedsoak once yes and no.

Also an multivitamin / multimineral taken with a fruit (each 2-3 days) could balance the appearance of mineral retention caused by phytates.

The nutrients that reduce the nutritional value of the foods in which they are contained are defined anti-nutrients. Phytic acid is also referred to as an antinutrient when it binds some minerals and reduces their absorption.

After discovering that phytic acid also has anticancer properties, what weight does its antinutrient status take ?!

Phytic acid will also be an antinutrient, but if from a anticancer contribution, that some minerals are also kept in exchange, which will never be!

THE PHYTS, THE FINGER AND THE MOON

Thinking about the phytates and how someone liquidates them in a superficial way, saying only that they reduce the assimilation of minerals, the parable of the finger and the moon comes to mind.

Do you know her? (Click on PLAY> and watch the short video)

If you focus on that essentially negligible (or at least easily overcome) aspect of phytates related to mineral chelation, you end up missing out on all the extraordinary protective benefits they can give you.

For those who have the habit (dictated by good faith) of always soaking all the cereals, legumes and seeds for 6-12 hours before putting them in the pot, it is better to reconsider this way of working.

Also think about the extraordinary benefits that the normal phytic acid content of healthy foods can give: inhibition of the formation of kidney stones, effect antioxidant e anti-cancer protection.

And do you have a habit of soaking whole grains before consuming them? do you think this is a good idea or not?  write a comment in the appropriate area at the bottom of the article and let me know your point of view!

Sign up for Messenger by clicking on the blue button below to quickly communicate with me ...