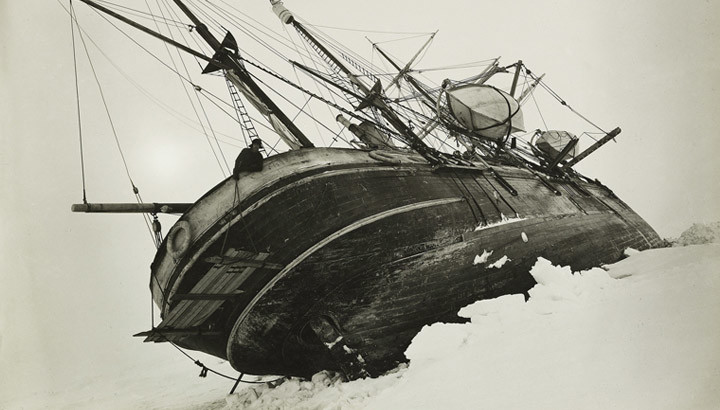 It is the chronicle of what is considered by all to be one of the greatest adventures of our times.

On August 1, 1914, Captain Shackelton's ship left for Antarctica where, just 80 miles from its destination, it was stranded in the ice.

And as in a slow agony, the wooden ship was crushed by the pressure of the pack ice that had completely absorbed it.

This forced the 28 crew members to the extreme decision to abandon the ship.

From that precise moment the true began survival adventure of these 28 sea wolves, which constitutes the main narrative of the book.

On the details of the story I will not tell you more because maybe you could decide to read Endurance. And I recommend it to you to experience all the strong emotions at first hand.

I'll just tell you that this book dragged me from one chapter to the next with irresistible force because I wanted to know how it would go with Shackelton and his team.

It's a powerful book.

But what exactly does all this have to do with the Natural Health Tactics that the blog deals with manuelcasadei.com?

Here, I think there may be at least three links between this book and the topics of the blog.

With regard to the ability of these gentlemen to bear, a particular sentence struck me, and it is this:

"Looking at the faces of the men on the small lifeboat, one had the impression that some were on the verge of giving way, while others would say that they could have endured forever...".

This part of the story is related to the second half of the journey, the one in which men were already faced with months of unspeakable psychophysical challenges.

So at that time they had been severely tested repeatedly over the years over 2 years who passed at the mercy of the elements, of the predators, of the scarcity of food, of the intense cold that gives no respite.

When reading this sentence you can really imagine two types of people: the dejected and the relentless.

Well. Sometimes even the healthiest health care professional can experience a drop in energy and health levels.

Who do you think has the best disposition to get back in shape as quickly as possible ...

The downcast or the implacable?

Gain the mental form of a relentless individual with respect to your health and wellness goals.

Do not let yourself be overcome by what is probably only a passing imbalance that will soon give way to renewed energy.

Stay focused in following the validated principles of natural well-being and letting time do the rest.

Another feature that you really never expected from this group of people trying to survive in the most inhospitable place on earth was theOptimism-against-all-hope.

It is extraordinary to read from their original diaries sentences like:

"Tonight we slept once again in reindeer sleeping bags completely soaked in freezing water… yet the mood is high."

"Despite the fact that even today the bad weather was relentless with winds threatening to smash the tarpaulins and not being able to sleep properly for days, a certain optimism remains and almost all keep their sense of humor almost unchanged."

In short, from time to time they emerged strong and clear inner positive energies. Which surprised everyone first of all!

Despite the terrible conditions in which they lived every day and every night for months and months, and although the chances of being rescued played completely against them, most of them felt that they were even happy.

Think what kind of immensely powerful mental energies we have there hidden within us!

Often they emerge only in the hardest moments of difficulty.

But only in the individuals who cultivate them even in everyday life can they be amplified in times of need.

In fact, the few pessimists remained such and were those who were considered by Captain Sheckelton to be the special guards because they could put the mood of the entire team at risk.

The teaching in this case is to avoid at all costs being accompanied by negative individuals.

Whatever the situation, it is the ability to always be constructive that can improve the conditions in which we find ourselves.

In short ... complaining is never an effective strategy.

If, in spite of this, some problems should arrive, well you will certainly be more prepared to face difficult moments and get out of them sooner and without damage.

Another thing that played a key role in keeping the Endurance crew alive is the vision of a goal.

In the course of this story you can gradually retrace a series of objectives that Captain Shackelton imparted wisely and firmly.

His role as undisputed leader gave even more energy to individual goals. This is how the human mind works.

But you can too discipline yourself autonomously by giving you goals - even small but stimulating ones - that lead you to take constructive steps forward that generate satisfaction and authentic happiness.

Without healthy and well-defined goals a person goes adrift and risks suffering the negative "gravity" of the dysfunctional habits that come from all sides.

If instead you have a good stimulating goal you can do incredible things. Shackelton teaches!

I hope these contact points between the extraordinary story of Endurance and the well-being of body and mind, you are useful.

Now it's up to you. To have your say on this topic you can write at the end of the article in the space dedicated to comments. Thank you!